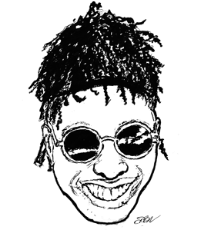 J’Wonn’s “I Got This Record” is this generation’s “Sho’ Wasn’t Me,” the most perfect expression in a few verses of an entire era of southern soul, and still the finest southern soul single of the last decade. I’ve never played it for someone for the first time without them being impressed and genuinely touched. “I Got This Record” is primal in a way nothing J-Wonn has recorded since is. Subsequent albums have been good, even exciting at times, with quality songs more frequently than not, but there have also been tendencies that have been, shall we say, disturbing.

Musically, for one thing, J-Wonn shows a distinct preference for melody over groove, tempo and rhythm tracks, the kind of “bottom” his old mentor Big Yayo used to bring to the table, which has resulted in a bit of a musical imbalance—for lack of a better word an overly “flowery” oeuvre. For another, culturally (and lyrically), J-Wonn indulges in a world view restricted primarily to teen-age angst (extended to twenty-somethings) which for southern-soul-loving grown folks in particular seems far from the urgency and realism of “I Got This Record”. If there’s a knock on J-Wonn, it’s been his tendency to limit himself to an extremely narrow slice of life’s experiences—sans marriage, divorce, working life, etc. He’s an open book, he asks you to take him as he is—all of which is admirable—but his preoccupations are often trivial or sentimental, something that would never occur to anyone listening to the equally young and raw performer singing his heart out on “I Got This Record”.

The good news is that J-Wonn has finally bequeathed us with a spectacular album to match “I Got This Record” and his quiver of glittering singles. Mr. Right Now integrates treble-clef melodies and bass-clef rhythm tracks with masterful alchemy. It also refreshes and recharges J-Wonn’s major theme: the male/female dynamic. Close watchers of the southern soul scene will immediately recognize the worthy and radio-friendly “Move On,” whose official YouTube video already tops five and a half million views, and “Girl In The Mirror,” with a melody so lushly memorable it stands out even in J-Wonn’s melodically-rich catalog. Along with the refreshingly uptempo “I’m Impressed,” “This Ain’t That” and “Meet Me”, this quintet of songs is migrated from 2021’s Black Heart, The “Move On” EP. In July of this year the indie distribution network Music Access announced the imminent arrival of a new six-track J-Wonn EP titled “Thrill Is Gone”. However, J-Wonn evidently decided to hold off on publishing another EP and packaged the “Move On” EP with the new “Thrill Is Gone” set to make an eleven-track album under the title Mr. Right Now.

“Thrill Is Gone” is a solid song, one of the best of the set, and it’s received extensive airplay and YouTube response from the fans. Show a little respect for the Godfather, B.B. King, though, Jawonn. J’Cenae recently recorded “Ain’t Nobody,” making anyone who loves Chaka Khan wince. Don’t these youngsters have any sense of musical history? B.B. King used to stay in a special, always-reserved, two-story room in a motel at I-20 & Ellis Ave. in your very hometown of Jackson, MS., Jawonn. If you’re going to use the exact same words in the title as an illustrious predecessor (and deleting the “The” in “The Thrill Is Gone” doesn’t count), better to do a cover song—an homage. Imagine J-Wonn doing a cover of King’s “The Thrill Is Gone”. I’d be interested in that. In fact, I’d be interested in anything J-Wonn wanted to cover, from LaMorris Williams’ “Impala” (which Jawonn wrote before he got famous) to Little Richard’s “Tutti Frutti”.

What “Move On,” “Thrill Is Gone” and “Girl In The Mirror” signal is that maturity is gradually creeping into J-Wonn’s duffel bag of techniques. Even a middle-of-the-road track like “Wantin’ More,” co-authored with Daniel Ross (aka Beat Flippa), has a deftness that lifts it above J-Wonn’s typical fare. And “Mr. Right Now” the strongest and newest cut on the album, is J-Wonn’s most outstanding song in quite awhile, with a memorable melody, instrumental track and vocal. Whereas so many of J’Wonn’s melody-dominated tunes bloom and die quickly from familiarity, “Mr. Right Now” has that ineffable quality (like “I Got This Record”). Written by David Jones, it’s more melodic than J-Wonn’s usual melodic stuff, but less obtrusively melodic. Like “I Got This Record,” it transcends melody, and J-Wonn sings it like an angel.

The funny thing is “Mr. Right Now” hews to the same juvenile behavior I lamented earlier. Essentially, it’s a young guy trying to talk a girl into a one-night stand based on their “animal magnetism” and other well-worn cliches with which women are painfully familiar. J-Wonn even bursts into Spanish at one point—one of the many unique touches that gives the song its special depth and insures it will be replayed long after other songs have faded. It reminds us that any subject can become universal (appeal to everybody) with the right musical ingredients and its singer’s conviction. Like some crazy unknown kid telling us he’s got a record. And like its title cut, Mr. Right Now the album is the first long-play set of which one can truthfully say J-Wonn fulfills the vaunted promise of his classic single.