Volton Wright: Love On You: The Album (Jones Boys Entertainment):

New southern soul recording artist Volton Wright has scored a trifecta of hit singles, and they just happen to lead off his new southern soul debut album, Love On You Tha Album—one-two-three—take your pick. They are, in order, “Southern Soul Girl” (featuring T.K. Soul), Super Woman (featuring JD and Jeter Jones) and “Circles”. I can’t remember a more impressive line-up of tunes leading off an introductory CD in many years.

It could have—and might have—been so different. Volton Wright came to the attention of the southern soul community in 2019 on the ground-breaking sampler, SLACK: My Music, My Friends: Southern Soul Compilation. He was honored with the lead-off track, “That Thang,” but the first artist from the sampler who capitalized on the platform Slack had provided was not Volton Wright but R.T. Taylor with his hit single and subsequent album, “It’s A Mule”.

Little did we know at the time that Volton Wright’s true specialty was melodic ballads, not “That Thang”-type, mid-tempo jams, and “That Thang” remained the exclusive property of Katrenia Jefferson, who had recorded her song of the same name years earlier.

Wright’s penchant for soulful slow tracks first surfaced in mid-2020 with his homage to the Temptations, “My Baby”. The video featured Volton and his back-up singers, including Jeter Jones, stepping onstage in vintage Temps stage style. Suddenly, for southern soul aficionados, it all fell into place. Volton Wright had a voice perfect for covering old-school soul.

The lovely and effervescent single “Circles” subsequently surfaced, and the message was clear. A remake of The Friends Of Distinction’s “You Got Me Going In Circles,” Wright’s “Circles” not only revived the original but if anything surpassed it in immediacy and vocal and instrumental quality.

The revelation of Love On You: Tha Album is the way Volton Wright has transitioned to originals. “Southern Soul Girl” showcases Volton and T.K. Soul on one of the most soulful duets of 2021. See Daddy B. Nice’s #1 Southern Soul Single for April 2021. Their harmonies on the chorus are exquisite.

“Super Woman” is as good or better. Featuring an even newer artist (JD) who wasn’t on the 2019 Slack sampler, and who scored a #1 Daddy B. Nice single with Jeter Jones in February 2021 (“Love You Down”), the song traffics on the cryptically-named JD’s knack for irrepressible, lilting melodies. Not only that, the chords mimic the famous chord washes of Michael Jackson’s “Human Nature,” putting it in truly celestial, musical company. JD takes the first verse, Volton the second, and then comes the unexpected treat. Jeter Jones raps! And he’s great: he raps the song in his own dogged style, bringing it off with monumental brio. The song is an outright coup of musical accomplishment.

Listen to all the tracks from Volton Wright’s new LOVE ON YOU THA ALBUM on YouTube. 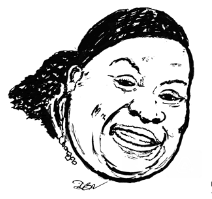 Tasha Mac is Jeter Jones’ little sister. Let’s get that out of the way first, because she has benefitted greatly from her big brother’s artistic guidance. Tasha burst onto the scene early last year with a single entitled “Get It My Way”. Backed up by Ronald “Slack” Jefferson on the instrumental track and aided by Jeter on vocals, “I’m Going To Get It My Way” has accumulated a staggering (almost a million at this writing) number of views on its YouTube video, which captures Tasha and Jeter dancing through the tourist-filled, Canal Street district of New Orleans.
“Get It My Way” and its follow-up single, “I Just Want To Ride,” highlight Tasha Mac’s new southern soul debut CD, You’re Not My Competition. Other high points of the album include “Lick This Candy” with the recurring phrase, “Come and lick this candy bar,” and “Eat That Cake”. Both songs hinge on smile-inducing, culinary double-entendres.

“I hope you’re ready
For this cake.
I made it special for you.
I’m gonna let you taste.
My momma told me
It’ll make you shake.
I know you like it.
Got icing on your face.”

The album as a whole reflects a sure-handed and confident young songstress who nevertheless has a lot to learn about vocal technique. Tasha’s natural register tends toward the bass clef, and as she negotiates the treble clef it’s sometimes painfully obvious her range is restricted to litle more than a single octave, giving the tunes and the set as a whole an unwelcome sameness.

At the same time, Tasha lacks the ferocious power (and resulting contrasts) of other contemporary “big” women singers like Lady Q and Annie Washington. What Tasha Mac does have, however, is a startling similarity to southern soul’s gone-but-not-forgotten and undisputed queen of “big women” vocalists, Big Cynthia, with whom she shares some of the same tics and mannerisms, including Cynthia’s ability to shrug off just about any challenge and slap it down in peremptory fashion. That’s an art form in itself.

Listen to all the tracks from Tasha Mac’s new YOU’RE NOT MY COMPETITION CD on YouTube.